While reviews coming from various web sites as well as computer magazines give mixed verdicts on Zone Alarm’s performance, a very innovative form of protection has been perfected by the makers of the software. The feature is called virtualization and this allows malware and threats to attack your computer. With virtualization, threats and malware are fooled that they have successfully penetrated a real computer. The virtual machine runs with Zone Alarm is able to isolate threats from the real computer and although still a new feature, has very promising signs of effectivity. 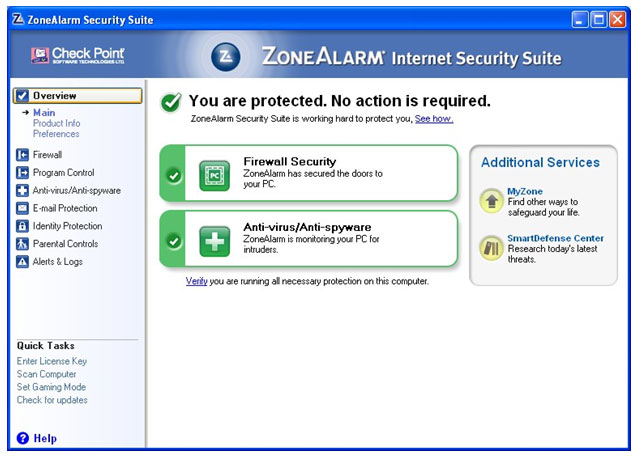 Like most security suites. Zone Alarm excels in detecting viruses and other malware as long as they have been assigned signatures. Signatures reside in the definition database and are one of the data that is downloaded by the software when it is updated. When it is time to scan the computer, either because such scan was scheduled or it was manually enabled, results of file scan are compared to the signatures present in the database. What other brands of security suites excel in doing, but not Zone Alarm Internet Security Suite, is the ability to detect new forms of threats and viruses that do not signatures assigned to them. Such form of detection is called heuristic scanning and is based on rules of thumbs on how viruses behave. This is what some experts call a major weakness of Zone Alarm and other security software as well. But with virtualization, Zone Alarm’s lack of sophisticated heuristic scanning could be more than mitigated.

A relatively new form of threat that has received much study is the rootkit. When rootkits are embedded in malware, it enables the creator of the malicious software to have full control of the computer and everything inside the computer is not safe, including data. What is creepy about rootkits is that most users will not be aware that their computer has been compromised and they can go on computing happily not knowing that data, perhaps personal finances or important office documents, are wide open to prying eyes.

Teaming up with virtualization, Zone Alarm’s firewall is another layer of protection for the computer and the data it contains. With the firewall, a user can setup zones of varying levels of security. In a trusted setting of office networks, the firewall can be lowered to allow unhampered connection with other computers. Out in the open, for example in public wi-fi areas, the firewall can be set to high levels of security which could effectively isolate the computer from threats.

Zone Alarm performance when it does its task like after boot-up scanning and on demand file scans is very satisfactory. Its user interface is easy to use and encourages users to explore it s more advanced features. Expert users have access to Zone Alarm’s configurations via advanced menus. When enabled, Zone Alarm Internet Security Suite demands little from the operating system.

Overall, most reviews of Zone Alarm Internet Security Suite state its more than adequate performance in protecting the computer. It is easy to use and have advance features that really enhances its use in securing the computer from the malware and viruses that emanate from the internet.