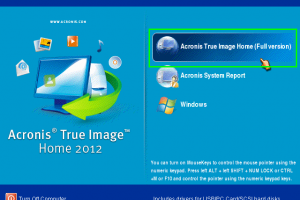 Acronis has recently announced the release of its new enabled back up tool for windows computers. Acronis True Image Home 2012 is an updated version that comes as a better imaging tool.

The tool is now better because it accords users a chance to not only back up the files but also system settings. In addition to this, there is also data synchronization and the chance to have online back up. These are just but some of the drive image abilities of Acronis True Image Home 2012. A lot of new features have been introduced in the new update 2 version. They include scheduler smart start and a scanning management tool for archived files. Needless to say, this program has also been equipped with necessary features to fix different bugs that were present in the earlier builds. The purpose of the Archive scanning management feature is to enable users to fix the program to the image files automatically the moment the true image begins to run. On the face of it, the Scheduler smart start allows the scheduler to start only when necessary.

There have also been more inclusions to the on the disk cloning process. These are unspecified improvements that are only meant to benefit users who want to migrate or duplicate files. It has been proved beyond reasonable doubt that the Acronis true image Home 2012 comes with the ability to fix different bugs such as error handling, installation and back-ups. Notably, the window start button cannot disappear after a file backup. The tool can also fix the problem of the unavailability of network storage as a location for reserve backup. Acronis True Image Home 2012 is meant for computers that are using the windows XP SP3 or a later version. Currently, you can get it as a free trial version.