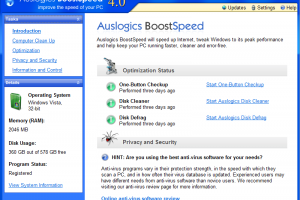 Australian Software developer is known for its two window performance tools namely; Auslogics BoostSpeed 5.3.0.0 and Auslogics Disk Defrag 3.4.3.0. The company has now announced major updates for each of these programs.

Apart from bug fixes and more helpful performance improvements, there are also numerous additional features to make it easy for use. Moreover, the performance tools are now compatible with windows 8. All the two performance tools have promised to introduce a new space availability check before you proceed to create a rescue centre back up. As such, this allows you to either proceed with the entire operation or abort it. Moreover, rescue center is now equipped with better options that enable one to  not only create but also restore backups that exceed 2GB in terms of size. Above all, there are also essential defrag specific improvements such as improved SSD detection. This is a very important feature that comes in handy when a user wants to enable a certain defrag algorithm for solid state drives. In addition to this, there is also the provision for better use of system resources to boost overall stability.

The Uninstaller manager feature has also introduced new changes. There is a new forced remove choice for deleting and viewing a program’s file. Also, it is possible to view the system components and the registry keys when the uninstaller is absent. The modules of the two performance tools have also received minor changes and tweaks in order to make them deliver better results. For instance, the file recovery search condition is now equipped with better section wizard for improved searching. Through the use of default settings, users can now go straight to the specific file they are looking for. The registry cleaner on its part has better categories list in order to provide better intuitive and sensitive presentation.