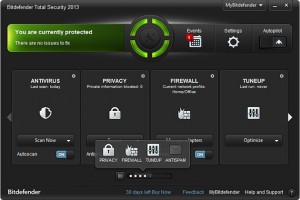 Security vendor Bitdefender has released a major update to its 2013 stable of security products. Bitdefender Total Security 2013,BitDefender Internet Security 2013 and BitDefender AntiVirus Plus 2013 have all been updated to version 16.20.0.1483, and include a large number of fixes, many of which are in response to customer feedback. The new build is automatically applied through Bitdefender’s own update tool.

Build 16.20.0.1483’s notable fixes include ensuring the Sandbox works in Windows 8, adding a separate folder for backed up files disinfected by the product and ensuring Rescue Mode can also detect USB drives.

The latest build also ensures an alert is displayed for invalid certificates, automatically refreshes after a password change from My BitDefender and improves scan flow and messages for ignored files. It also now starts the scan process with proper administrative rights from the beginning.

It also fixes a problem whereby even after displaying the registration confirmation message, “You’re all set! Your product has been registered successfully”, the product key remains on trial.

The Anti-Theft PIN can no longer be bypassed in certain conditions, while problems enabling anti-spam or selecting quarantined items using the [Shift] or [Ctrl] key or mouse have also been resolved.

A full list of changes and fixes can be found at the Bitdefender forum. Many of these fixes came about because of customer complaints.