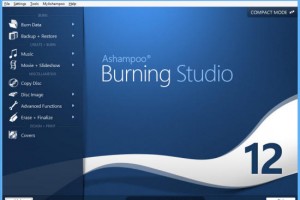 A new Ashampoo Burning Studio has been released. This is the best burning suite that supports flagship discs. The Ashampoo Burning Studio 12 comes with more advanced features that other versions do not have. This version of Ashampoo burning studio is designed with the capability of handling huge amount of work in the same time. The improved ability to handle more jobs is one of the features the other versions lack.

The version can support BDXL discs of capacity of 100GB or 128GB. Therefore, Ashampoo Burning Studio 12 enables you to burn a lot of data to a single disc. When the capacity of work exceeds the storage capacity of a disc used, this version of Ashampoo is designed with spanning features of discs to automatically divide the job into different disc as possible. It’s more reliable and easier to adopt. The quality of disc features is improved especially on the sound effects or equalizer of the audio disc. You can handle sound effects to a single track as you require. The increase or decrease of heights, bass, loudness and other sound effects are some of the features that are brought by this type of Ashampoo version.  The version comes with many benefits such as ripping a CD to a FLAC file. You can also be able to use CUE sheets to burn an audio CD.

There is a greater distinct between Ashampoo Burning Studio 12 and other old Ashampoo versions. The improvement in this version is worthwhile and it’s seen in the program or software. It is easier to video track to normalize its sound/audio effects. In addition to that, you create credits of any choice on slides or applying ken-burns effect. Ashampoo burning studio is the latest version of Ashampoo burning studio versions. The versions is the only remaining and outstanding alternative to handle huge volumes of burning suites. It is the easiest and faster to use. You can obtain this program at a price of $39.99. The program enables you to create or you are able to customize the audio and video files and tracks in the process of ripping or burning.