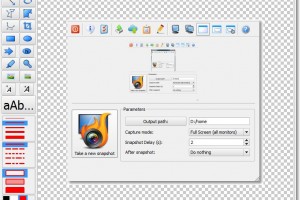 Its new feature of extended screen capture is a good addition Windows 8 brought. You only need to press Win+PrtSc to grab and save your current screen to disk.

This of course is a small improvement. You need time to edit your grabs to make them ready for use. As such, having a tool such as the free HotShots that is able to capture screens and edit them easily is a good idea.

This program offers a range of capture types when started. All have default hot keys for them and you are able to customize them too.

Once the HotShots takes a snapshot it is able to add some quality effects. After adding such effects as drop shadows, torn edges and many others it could save the image to disk either automatically or with the “Save As” dialog.

If you want more, you could open HotShots editor and enhance your grabs with annotations that are vector based.

These have simple tools as well as complicated ones. Once you create your polygons you could have multiple copies but one deficiency with the program is that there is no undo feature. However, you could delete one.

Lots of tools are there to help you in annotating screen shots. You could highlight texts, encircle them or draw rings with these tools. There are many more of them including a magnifying tool.

There is also an Obfuscate tool that could pixelate an area to hide your user names, email addresses and such other personal details.

With tag tool you could add sequential numbers to bullet points of images. They also could be positioned anywhere.

Finally, you could copy the finished image to clipboard and save to disk or upload to the web no matter what the location is.

The conclusion is that HotShots is a screen capture tool par excellence. Its editor is the one that is exceptional. It is even better than some of the stand alone vector editors. HotShots is best for those who often take grabs and annotate them later.