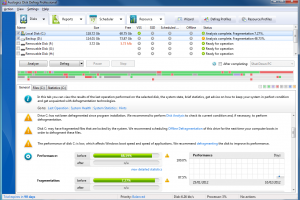 Auslogics has recently launched Disk Defrag Pro 4.2. This is a reliable and fully loaded Defrag tool. It comes with exciting features such as full compatibility with windows 8. The tool also has a lot of improvements and other useful enhancements.

Disk Defrag Pro 4.2 sheds more light on SSD drives that are installed in the system. It gives you the status of the drives within a short time. Practically, there are many enhancements and improvements that make this defrag tool a must have. Its ability to alter the profile settings windows and maximize them makes it the best defrag tool. Indeed, the success of this defrag tool is already a foregone conclusion. With it, users have a better overview of all their options. There are also new settings included for the cluster map style. This is a clear indication that users have a complete control over the look of the cluster map.

According to close sources associated with Auslogics, the new program is fully compatible with AVG 2013 as long as it is in the offline defrag status. Disk Defrag Pro 4.2 offers a good offline processing for all external drives. Other enhancements that have been added to the program include; better bug fixes and a better scheduling calendar. All these improvements are what make the defrag tool better than its predecessor. If you currently have the old version, it is in a position to detect the latest edition. This defrag tool from Auslogics is a quality commercial program that has a lot offer to the user. Most of the keen observers and advanced computer users have already proved that this tool is effective and user friendly. The improvements and enhancements included in it make it a modern defrag tool for novice users as well as the advanced users. It has better functionality and more enhanced improvements.