Latest release of Icecream Apps for extraction of files 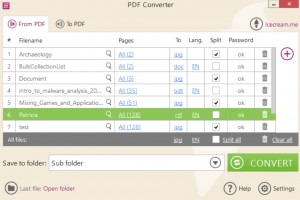 Icecream Apps have released new program known as Icecream PDF Convertor 1.3 which has got tools for extraction purpose. The program is specialized with extracting text from PDF documents  that are more than one in number and then saving in formats like txt, doc, rtf and odf.

An older version released by Icecream Apps had the option to save only in html format. This never worked for many, but it is seen that this has been functional in this new release. The first review on checking would definitely give a mixed response.PDF Convertor does extract text from some of the PDFs, even though they are based on images available and they are bundled as a copy of an engine that is open source known as Tesseract.  Even though it is not a plain text, you could run PDF to convert to doc format and our destination file does give bold correct headings.

This did not work as we would expect with documents that are mixed with images and texts. The program does extract from the test files, text but it does display two numbers of binary garbage in which images were used to be. It is not the mistake of OCR engine but the images did not have text for extraction. The PDF Convertor does need to handle such situation in a much smarter way. Maybe the better option would be to ignore the images especially when you are interested only in the text in the document.

Using Icecream PDF Convertor, you could convert PDFs to as many formats, such as creation of PDF documents from office documents, ebooks, images and much more. It is completely a free adware application and very safe to try too. You could check how it works.