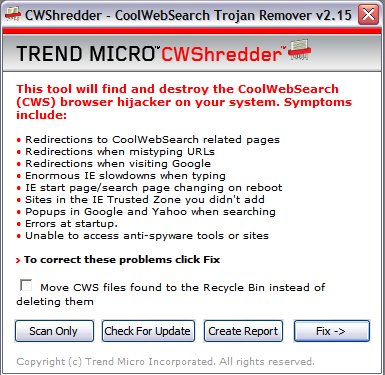 The CWShredder is an interactive program which is running on the MS Windows OS. It helps in removing all kinds of spyware especially the CoolWebSearch. This was originally developed by Merijin Bellekom and was made available to the market by InterMute in late 2004 (i.e. on Oct 19th). On June 2005, the InterMute was acquired by Trend Micro. The program is an interactive application which provides the minimal interface. This simply reflects the narrow focus of the application which helps in easy scanning and repairing of the problems.

Currently, the tool is being promoted and sold by Trend Micro and is sold in two forms. One is Trend Micro Anti-Spyware which was formerly called as SpySubtract and the second one is nothing but a stand-alone one which is a normal Freeware program. Basically, since the transfer of the ownership, this program has not been updated. Even the current version which is still running in the market was somewhere released on November 2005.

Even though it is still functioning, it is somehow unclear if Trend Micro has got any plans in updating the program. In addition, there is a controversy going on in certain quarters with regard to whether Trend Micro should or should not declare the CWShredder as an open source. There are certain sources which are compelling the firm to give up and transfer the ownership of CWShredder to third parties in order to ensure that the program can be properly updated and maintained.

Even though the CWShredder is not a full blown or compatible, this tool can easily handle a single job with great aplomb. Just like how the name is, this tool‘s main aim is to purge the PC from various kinds of notorious and bad malware components like the CoolWebSearch. Basically, the minimal interface would just reflect the narrow focus of this application and with the help of few buttons available for scanning the machine; one can easily report the problems.

As per most of the experts, even though the program may not be the best anti-spyware program, still its performance can be applauded. The program can be easily searched and one can remove all the kinds of remnants related to the CoolWebSearch. Frankly, the CWShredder won’t be a major source of adware solution, but still regular downloaders and web servers can still use it.