Best and Easy To Use Open Source Fork From Windows 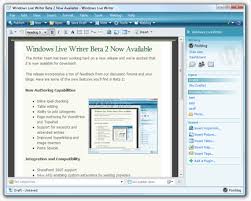 The first release from OLW had variety of features. Some of them were creating blog posts, adding videos, photos, maps and etc. All these given features and elements were published in the website of the user. Compared to other tools, the program could support various kind of blog services like Blogger, WordPress, DasBlog, TypePad, Moveable Type, and the list goes on. Of course, it has issues related to licensing.

With regard to licensing and other related issues, it meant that the development and research team had to drop and take in some of the ancient Live Writer features and usage. But some might say that still the tool is modified and has got decent update, making it a hot choice for usage. At the moment, the feature like Spell Check has been removed. Even the Blog This API which was present previously, has been ditched forever. In addition, another important feature is that the OneDrive ‘Albums’ feature has been removed too.

However, there are some good news too. The development team is actively developing and working on creating various kinds of support plugins. Just as soon as this occurs, you can take the advantage of the third party developers who would easily fill in the gaps present in the functionality. There are other kind of priorities which help in supporting the Oauth 2 authentication scheme and by this the Blogger can easily take advantage of the features which are exclusively present in it.

Another extreme feature of the Windows Live Writer is, one would never get the OAuth 2 support. This means that if you are just now using the Blogger account, then you can move towards the Open Live Writer tool. This is great and the best feature and something to check out for.