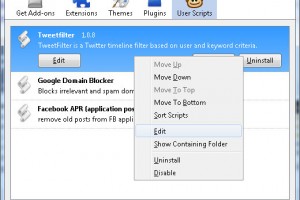 User-friendly and easy to use add-on which helps to customize the display of the webpage using small bits of JavaScript.

Firefox 6.0 and Firefox 7.0 are now ready for testing in mid April and mid May 2011, respectively. Several things have been changed in these latest versions during the upgrading process. In order to accelerate the performance and to maintain quality of the product, the latest version is becoming more […]

The latest updates of Mozilla foundation are currently available to the public. This is according to the changes done to some of the products of Mozilla. Some of the software that where changed include thunderbird that was change to version 3.1.8. It also updated Firefox 3.5 and Firefox 3.6. All […]

The New Look of Mozilla Firefox on 4.0 Version

The Mozilla Company has just released some mock-ups of the new interface of Firefox 4.0. Interesting changes have some Firefox followers excited, but modifications also have some Firefox 3.5 fans speculating doubtfully about the final product. Overall, changes made by Mozilla in any of its products are almost always anticipated by Firefox users who still believe that Firefox is the way to go in internet browsing.

Two mock-ups have been released for the perusal and critiquing of Firefox users. These mock-ups serve as a sneak preview into what to expect with Mozilla Firefox 4.0. The first version shows the classic layout of the address bar with the tabs placed beneath it.

Nine Things to Check Out On the Fresh Face of Firefox 3.5

For Firefox fans, there are many things to look forward to when Firefox 3.5 debuts at any time soon. The much awaited browser was first available in Alpha type during July, 2008, and fans are itching to see what Foxfire 3.5 will offer this time round. Later on, two Release Candidates were made public by Mozilla giving a nice preview of what the final and absolute edition of Firefox might look like. Now many are expecting great changes to feed their technical and surf-hungry minds!