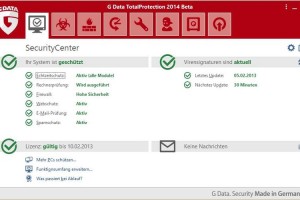 Check the new range of G Data 2014 security software releases introduced and launched for the public. The line includes many of the publishers acclaimed security programs like the G Data Antivirus 2014, InternetSecurity 2014. The patch also include G Data’s most reputed product the G Data TotalProtection 2014.

G Data calls its technology as CloseGap that aims in providing quicker and effective guard from the malware. It deploys both the reactive and proactive mechanisms for malware detection and removal. All the latest version of the program and its components has automatic features. Built with Autostart Manager the individual software can speed up their run. Therefore, whenever you turn your desktop on the program gets started fast.

The G Data TotalProtection 2014 is a program that needs special mentioning for its control customization option. Users can set it with external drive for storing and set command for creating back up with limited access. Compared from previous versions, the new 2014 G Data security software bundle’s have easy to operate user interface. Plus to all its major revamps, G Data has incorporated the BankGuard technology, a real time protection mechanism that shields your online purchase and banking transactions. It also features the best malware detection technology called AV Comparatives.

G Data 2014 security software’s may not be the number one security solution now, but the way it is improving its products line, it can soon become the champion. Use G Data Antivirus 2014 or G Data Total Protection 2014 and G Data InternetSecurity 2014. Take relief from headache with G Data.