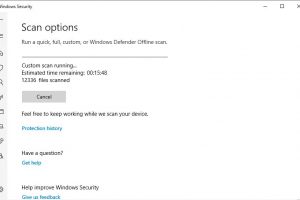 The Windows operating system records another incident with a problem created by Microsoft’s update, when this update did not render the Windows Defender antivirus built-in in Windows 10, for example.

Specifically, scanning files, whether run by the user or scheduled at regular intervals, does not work. Such scanning will end after a few files are scanned after a few seconds.

It is not yet known in what configurations this problem occurs and how many users are affected.

According to Zdnet, for which Microsoft has confirmed the problem, Quick and Full scanning does not work, the problem should be avoided by using Custom Scan. At the same time, according to Microsoft, the problem is not related to the functionality of scanning and protecting Defender in real time and it should continue to work.

The problem this time was not caused by a regular monthly Windows update, as with several recent problems, but probably this week’s Defender update, which was supposed to solve an earlier problem with sfc and Defender.

The problem is related to Defender version 4.18.1908.7 and later and should not only apply to Windows 10 but also to other versions of Windows.