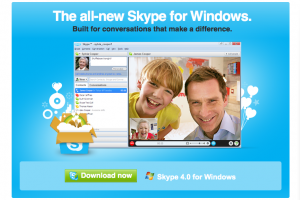 This premium product’s main objective is to keep you connected through out from any where you are. The new phone software contains the basic Skype functionality and it’s used the same as the other Skype for computers. Its features include, free Skype voice calls via the 3G and WIFI networks. Instant group messaging, free video calls and many more. This revolutionary software has been received with the prestige it has. Imagine having a video conference with your workers while still you’re in your house through your phone. You can call see and send messages at the same time to many people with much less hustle. Skype for Windows Phone has no limitation. You can use it from anywhere if you have cell reception. This is because the designers have found a way to integrate the phones signal to transmit this signal to another phone. This software uses the concept of java script.

Some of the special features in the windows phone that allow Skype to be at its best are, ability to integrate al your contacts from other massagers to form one big contact list that can be used in Skype. Some of these massagers are soon to be decommissioned. The phone also allows Skype to run in the background. You will be connected at all times even if the phone is in a hibernating state. The phone will alert you incase you get a message. Skype for Windows Phone is an ingenious idea. Its main aim is to keep people connected at all times at very low costs.