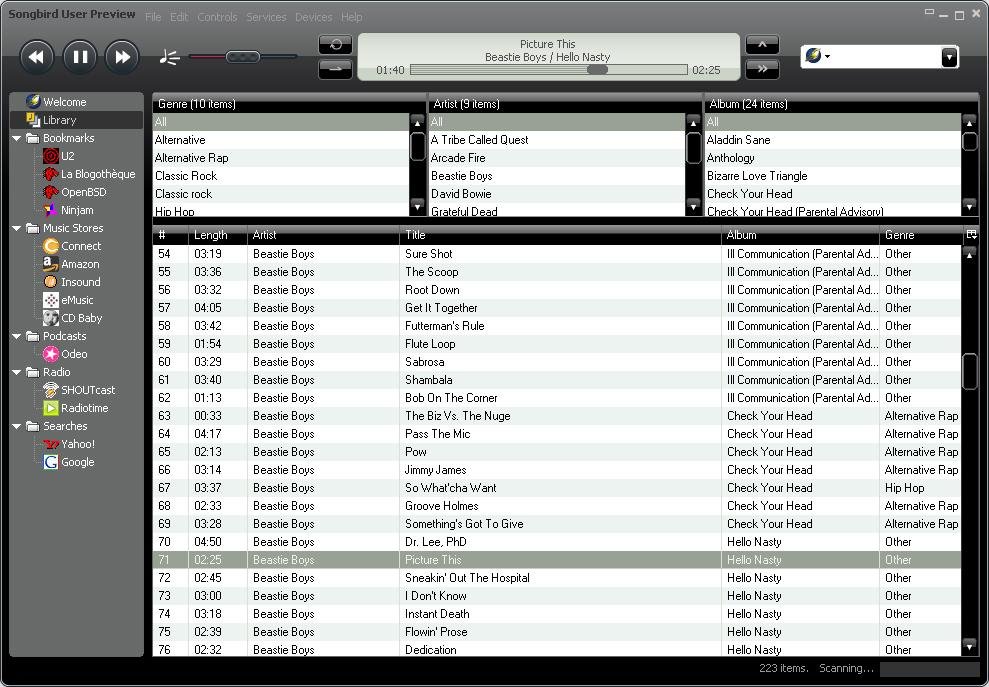 The Songbird is one of the discontinued music players. This was released in early 2006 with the major mission of incubating the Songbird as one of the first web-based players which can champion and catalyze the diverse and open run Media Web. Basically, the Songbird uses the best and currently available the cross-platform framework like GStreamer and XULRunner media related framework. The tool is one of the best and easy to use multi-platform compatibility music tool which is easily used in various OS like Windows Vista, XP, Mac OS X v10.5 versions.

In addition, the Songbird is easily applicable and runs on the OS X and Windows operating system. Somewhere in late 2012, an android version of this tool was released.

At one point, the Songbird was supported by Linux and Solaris, however, later on this support was dropped. So, because of that the user had forked Songbird and Mac, Windows and Linux compatible derivative was created under a new name called Nightingale. As on 14th June 2013, the authorities and developers of Songbird had announced that they would stop all kind of operations related to song downloading and upload and on 28th June, it was closed.

Furthermore, the firm was not able to fund its future operations and this is the major reason on why all the associated services and operations were discontinued. There are various innovative features of the Songbird. One is that it is a multi-platform tool which is compatible in Windows Vista, XP, Mac OS. Also, it can play various audio formats like AAC, OggVorbis, MP3, Apple Lossless, WMA, etc. In addition, it has gone the major ability to do the Apple FairPlay encoded audio on the Mac and Windows platform which is through the hooks of the QuickTime. Another interactive aspect of the Songbird is that it has the ability to play Windows Media DRM audio and of course on the Windows platforms.

Plus it has got a skinnable interface which works like a normal skin and is known as feathers. One can even store media files on pages viewed in the browser as playable files of the Songbird. You can even download the MP3 file and also have MP3 blogs as the playlists. Additionally, you can create custom mixes with the Songbird.