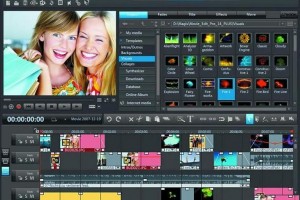 The renounced movie and video clip editing software publisher MAGIX has released its famous MAGIX Movie Edit Pro 2013. According to the product information kit available to press the latest edition is the highest mark of the publishers endeavor to turn the software into the most powerful editor. In short the latest release have concentrated mainly on speed enhancement.

According to the detail the AVCHD import is enhanced to perform in 40% faster speed. Accordingly, its processing effects over the GPU will get 90% boost. This will make the rendering speedier and will cut the AVCHD full HD projects done in half time. In the new release an anti spill feature is incorporated on the chroma key engine so the sharp contour, blue effects, green effects from the visual output will be eliminated. This anti spill feature is the resulting improvisation from earlier features. Given no contour at editing board the play time or trimming of the clips from data source or media pool will improve the essential work flow.

Lots of changes were made to the recent release in MAGIX Movie Edit Pro 2013 like enhanced importing capabilities geared with Olympus OM D, the new DirectX 11 effect. It can now support and remains compatible with 50p progressive video standards on AVCHD. Whether it is title editing, smart preview rendering, H.264 export; the MAGIX Movie Edit Pro 2013 has got so much improvements. It is released as a three program combo pack where the Movie Edit Pro 2013 is the basic product that gets augmented with the extensive coloration correction coverage, advancements in effects customization, more templates, editing for multicam input and AVCHD authoring. Further to the list the NewBlueFX Essentials, proDAD Adorage 13 and digieffects Phenomena also comes in handy with the new release. Considering the diverse usability the MAGIX Movie Edit Pro 2013 is lot more powerful now.