IoBit Announces The Release Of ASC 6 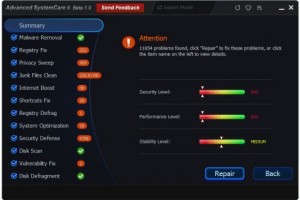 A better optimization tool has been released with a much more updated interface. Announcing its release, Iobit has assured users that Advanced System Care 6 version will be easy to sue and it will come with full compatibility for Windows 8.

The optimization tool is available in pro version and there is much more improved functionality to make it more beneficial and easy to use. Also known as ASC 6 free, the tool can be able to make changes to browsing protection, privacy databases and driver manager. There is also support for the addition of languages as it gives more room for fixing bugs. The new version is different in comparison to the previous ones because it redesigned and features a user face that has been modernized and streamlined. The simplified mode is better and seems to target the users who are not experienced. There is the inclusion of smaller icons in the interface and all of them can be displayed on the screen at a go.

ASC 6 Free version is user friendly and features more updates especially for the driver manager and protection of surfing. As such, it is a tool that can provide protection compared to the previous versions. It is a build that features full compatibility for Windows 8. The new build is going to be released soon with most enthusiasts waiting to enjoy the features. The additional language support is also an amazing feature that has been included. It can be used for any computer as long as it is running Windows XP or a later version. With a license, one will be able to enjoy reliable scans, anti malware immune and updates. The functionality of the build promises to be better and offer users more options especially in surfing protection. It is a streamlined version that has support for all the windows including Windows 8.