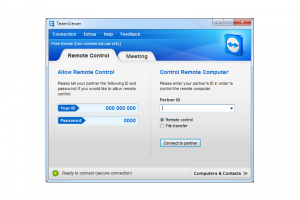 TeamViewer GMBH has announced the release of TeamViewer 8. It is a tool that can be used for remote support and better control. The new version 8 is better and comes with more versatility and user friendly features.

The new version is making a debut alongside the TeamViewer touch for windows 8 that also promises to be a useful tool for connecting machines. TeamViewer version 8 is compatible with windows and Mac. It is a new feature that has Retina displays for Mac. Even more importantly, this version is equipped with features that enable it to record video and sound in any remote session. The other good advantage is the fact that this latest version is able to support multi touch gesture technology on different displays. If you are a no touch user, you still can benefit from the new app. You will be able to access windows 8 features through the use of remote control toolbars.

The new version enables users to print from remote connections. This is a clear indication that users will be able to print on their own desktop through the use of this new program. There is also an extra button that will be able to benefit outlook users. As such, planning only meetings wild now be an easy task as long as you opt to use the outlook calendar.  You can then send it as invitations to the selected users. The new TeamViewer version 8 offers nothing but versatility. It can be used as a collaborative tool and the sessions of the meeting recorded for the purposes of documentation. Recording of sounds and videos has never been this easy with the use of this version. Even though it is still restricted to license holders only, it has a lot to offer to those using the trial version. The new version also boasts of a new web based console that features an integrated web converter for easy use. It means that the user will be in a position to access remote machines through the web browser.