Piriform Announces The Release Of Ccleaner 3.27 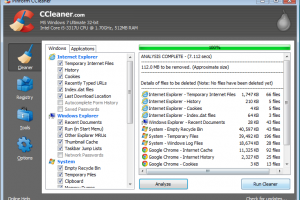 Piriform has released a windows cleaning tool called CCleaner 3.27. This is an upgraded version that is also available in a potable form. It comes with essential updates that are necessary for new browsers.  For instance, the tool is fully compatible with internet explorer metro.

CCleaner 3.27 boasts of major improvements that make it better than its predecessors. There are innovative features that make it compatible with Windows 8. There are also more capabilities of cleaning the history in the internet explorer metro or on the cache.  Needless to say, the new program is better and easy to use with a user interface that is straightforward. You will find it easy to navigate and explore even if you are using it for the first time. The new update has been a gigantic leap forward because of support for latest and newly introduced builds such as the Google chrome 24 version. Users will also be privileged to enjoy full compatibility withFirefox 17 and a number of new stable releases from major browser companies. Yet on the face of it, CCleaner 3.27 exhibits full compatibility with Google chrome extensions. Apart from Burmese translation the new tool also comes with a better Unicode support for texts.

Even though users have few complains with many claiming it is a little bit more complicated for normal users, CCleaner 3.27 has surpassed its predecessors in terms of new features and compatibility with major browsers especially the latest ones. All the latest versions of Java, Windows power shell and Internet explorer can be successfully detected by this tool. It has been released alongside Speccy 1.20 which has also been equipped with superb features. Speccy is superb especially because of its ability to detect SSD and other types of complicated hard drives. All these tools are available and can be used on PCs that are running Windows XP or a later version.