Get Multiple Drives Checked By Defraggler 2.14 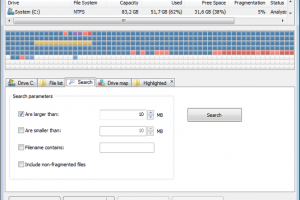 Defraggler Portable 2.14.705 and Defraggler 2.14.705 have been released by Piriform a noteworthy but minor update for its defragging tool which comes as freeware offering users the facility to defrag either entire drives or individual files.

Defraggler version 2.14 is able to add support on UDF files and also it allows its users to defragment the free spaces of their drives on given schedules. Also, it is able to improve its search tools as well as navigation.

Users are now able to schedule Defraggler 2.14 in such a way that it will defragment the free space of a drive at intervals set by the user. The way to do that is to select Settings > Schedule, and then enable the schedule with regard to the selected drive. Select Freespace from the dropdown menu of Defrag type. You also could choose Freespace (allow fragmentation).

Now you are also able to get multiple drives analyzed with just one click. Drives could be selected from top pane with the use of [Ctrl] key or the [Shift] key. Next, Analyze button has to be clicked on in order to carry out an analysis on the basis of drive by drive. Results for the drives could be obtained by clicking on the entry of the drive.

Defraggler 2.14 has extended its support for file-systems to include UDF which normally is there in rewritable DVDs and CDs. This is complementary to the support for NTFS, FAT/FAT32 as well as ex FAT files.

GUI has been refined to offer better navigation. In monthly scheduler one minor bug has got fixed. There have been other minor improvements as well. If your PC is running on Windows XP or later Defraggler Portable 2.14.705 and Defraggler 2.14.705 could be downloaded as freeware.