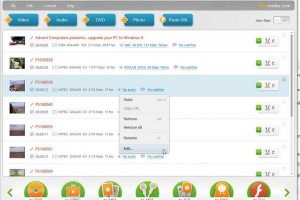 Video gamers will be happy to learn that the Fraps support is now enabled with all the FreeMake Video Converter. The publisher of FreeMake Video Converter has recently released its updated version numbered to 4.0.3. This ad supported video conversion tool can work with Fraps files which are essentially important for the game lovers. The Windows only version is seeded with game recording capabilities apart from its very distinct abilities of converting numerous MP3 and WAV file formatted files.

With Fraps support it is possible for the gamers to convert their recorded files into different formats including the AVI, MKV, MP4, 3GP and so on. These file formats not only runs on your PC but also on your laptop. And further to that the new version is powered with conversion technologies for file formats that can run on mobile phone OSs. So, any converted file if you want to run on iOS based handheld devices you can do it easily. The FreeMake Video Converter with Fraps support has also enabled you’re the file function for Android and other traditional cell phone OSs. The editing features are also there to make the cutting, cropping, resizing, etc tasks easier than the earlier versions. As a plus to all other mentioned benefits the tool is handy in uploading videos to YouTube or other peer to peer sharing sites. We must mention here that the Fraps files are foreign to YouTube however the site still can work conveniently with the new breed.

The new version is also reported to support 10 bit video, DV AVI, AMR files. It can also support the WAV files for DTS code sporting along with MPEG codec. When compared with FreeMake Video Converters earlier version the new one has showed significant improvement in service qualities that include aspect ratio detection for incorrect or distorted audio content, file conversion for TRP and M2V, auto cropping and CPPM protection for DVDs. The improvement list also have conversion support for PSP and iPad 3 and video downloading from major video sharing sites like Vevo, DailyMotion apart from the YouTube. Download the free program FreeMake Video Converter and ensure to select its custom version as this will make your work free from unwanted advertisement content.