Spelr – Getting the Spelling Write As And When You Write 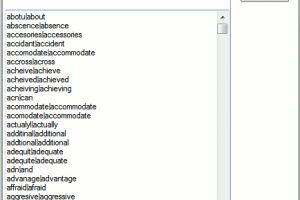 A common view which is present online is that spelling is not so important and it never matters. If one does make a mistake it never matters and making a mistake is not such a huge deal. And if there are people who do say so, then they are the biggest Evil Grammar Nazi who is difficult to ignore. In addition, there is certain amount of truth at least in certain situations.

But the common problem is that whenever we check the email or forums, or anything else, it would be better if one avoids the basic distractions which is spelling mistakes. The Spelr is one of the free tools which is compatible with the Windows 2000 and which would check out the contents of the selected text, clipboard, and the various text present in the current text field or documents.

Some may feel that it would work quite better in the available browser text box. BY default the program uses the US English dictionary. However, one can switch between the various other types of Setting dialog like the French, British English, German, Russian and the list goes on.

Another major advantage or benefit is that the Spelr would never use a prescribed format and since it is compatible with the Mozilla dictionaries. This means that one requires less preparation and it simply works quite well in any language of your choice. The Spelr once gets installed into the system, then it would jump into action when one simply press clicks the customized hotkeys like Shift +F1, Shift +F2, etc.

Now if there is no spelling error or any kind of mistake in the word written, you can carry as before. If there are issues with the words, then a dialog box would appearing explaining what the error is about. The user would see the word which is misspelled or offending and an alternative would be shown along with the option to replace it. You can either ignore it or simply add the given word to your personalized dictionary so that it won’t be asked again.

There is an auto-correct feature present in the Spelr and it is most often used when you misspell a given sentence, thereby meaning something else as per the given situation.