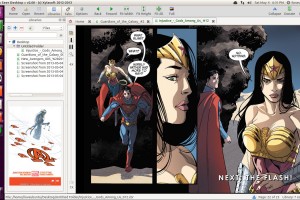 Most of us never thought about how much easy it would be to read comics. All you have to do is take a CBZ file, change it to ZIP format, open in the browser (Windows Explorer) and check out the images. Isn’t it simple?

This is for people who are occasional viewers. What about hardcore comic book fans? So, if you are one of the biggest comic fan and want to immerse yourself into the world of comics, all you have to do is install special tool like the Comic Seer, which is free to use. The core of this program is it is a capable software fit for readers. A single click is only required to make the contents fit into a page with the required height, width, and rotate it through 90 degrees; displaying it on the full screen. Even you can switch between the dual and single page modes making it suitable for all kinds of layout.

Plus, if you want to check out some of fine details, all you have to do is right click on the particular area where it shows the magnified view. Even you have the authority to use the 1x—4x slider as and when there is the requirement. This tool is quite cool for people who like to do multitask. At the same time you can open several comics with each displaying one another on its own tab. By default, these comics are saved and there would be reloaded in each of the sessions. If you by mistakenly close a given file, the Comic Seer would still remember it and restore it when you open the tool the next time.

There are other navigation options like the Browser mode which helps in faster generation. It even displays the various clickable thumbnails present in each of the page. Even there are bookmarking factors which allow one to tag any particular page and simply restore it later on. Not only that the Comic Seer has got a tool ‘Comic Information’ which shows the metadata for each of the individual comics in case such comics do have. Even editing can be done using this tool and you would have to install third party tools like ComicTagger.