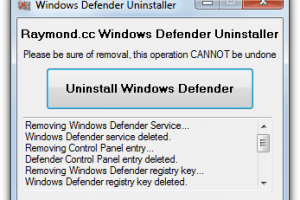 Since the introduction of Windows Vista operating system, there has been use of Windows Defender. It is considered as a small program that runs on the background and then protects computer from any anti spyware and malicious software. Even though Defender has been since 2006 and not a fully available application, it does provide protection for Windows Vista and for out of the box Windows 8.

Windows has introduced this as a package as opposed to any other smaller spyware tool. Many people prefer to uninstall this software as they wish to use other anti spyware software. Windows XP does provide option to either install or uninstall by using the option known as Add or Remove Programs. Most of the time when you install new anti spyware or application that includes antivirus  spyware, it should to smart enough to get the Windows Defender uninstalled as now the newly installed software can take of its work of protection and the use of any other software.

Although some users opt to use this software to uninstall Windows Defender, most users especially those using Windows 7 ought to understand the value of keeping Windows Defender turned on, because of its ability to alert the user on potential risks such as unwanted software.

This software uninstalls Windows Defender by simply using the services control to disable it or by turning it off. Initially, what this software does is that it disables service, and ensures that the Control Panel entry is uninstalled as well as other folders and files. Although it could be complicated as some of these files and folders are protected using enhanced permissions, which requires the user to acquire ownership before these files, are done away with, because defender cannot be installed back once it has been uninstalled.

Suppose you are already running anti malware suites and you will not realize that Windows Defender is installed with Windows and in such case, you are wasting the resources. Sometimes the spyware installed could be free since it is built in such a way. If you are already running malware tool that provides greater protection, then in that case there is no need to have another application running. In such a case, getting the software uninstalled is a better option than retaining it.