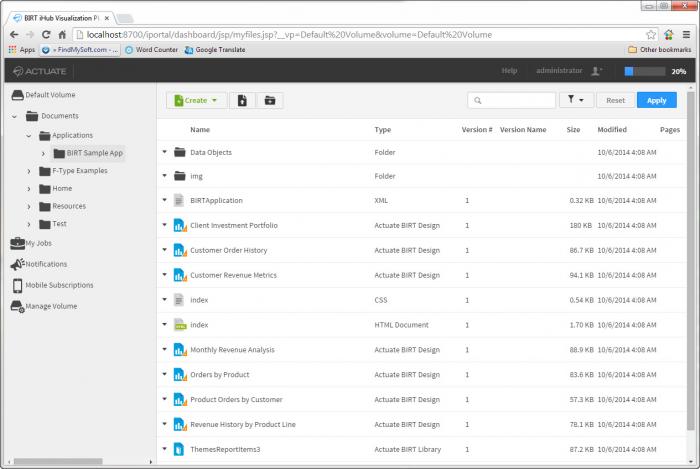 The BIRT iHub F-Type is one of the best and next generation interactive information visualization and reporting technology. It is often used by BIRT developers present worldwide and is free to use for various kinds of business. Now the shifting to an economy which is quite in subscription mode has become possible in the past few years and it is by this tool that consumers are able to purchase application which are functional through the normal form of subscription and payments which can easily help in matching the usage. This is what makes BIRT iHub F-Type one of the leading and best software enterprise tools. The tool is basically created for managing and distributing the contents which have been created using the open source BIRT Designer Pro IDE related to Actuate’s commercial tool.

Like most of the free software tools such as GitHub, Splunk, Dropbox, Skype, etc. which provides a great amount of free version of premium commercial tools, the BIRT iHub F-Type allows users to easily get access to the basic functionalities which are cost free and assist in purchasing the additional functionality as and when required.

In addition, the BIRT iHub F-Type, instead of simply throttling the basic volume of the given data input like how the Splunk does, here the volume of the data output (which is daily one) is simply limited to a great and suitable level which most of the developers would be needing. Also here the user won’t need to place any kind of limit on the input data. Plus, the developers would be getting about 50MB free everyday with regard to output capacity. This can be easily used for deploying various reports (i.e. in terms of hundreds) which contain thousands of tables and have various visualizations all day.

So, what happens is that when the daily output of the given volume is increasing more than the given free capacity, then developers get the easiest option for purchasing the additional capacity of output through the basic subscription which is present right inside the BIRT iHub F-Type. So, in order to gauge on how the given data can be consumed, especially from the end user, the developer would have to exceed the daily capacity of the work two times before the daily limit can be enforced.