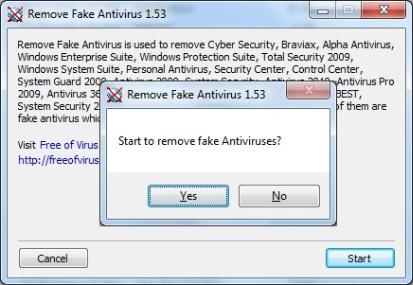 The Remove Fake Antivirus 1.99 is basically used for removing various antiviruses like Cyber Security, Alpha Antivirus, Braviax, Green AV, Total Security 2009, Protection Suite, etc. Of course, various other kinds of suites like the Personal Antivirus, Windows System Suite, Spyware Guard 2008, Anti-Virus-1, System Guard 2009 and System Guard 2008 can be removed with this tool. The tool is extensively used for removing all kinds of fake antivirus which have the similar functionality of a Trojan or viruses. Unlike the other antivirus tools, this is quite easy to use and has got various innumerable features.

Now the question that comes to your mind is what is fake antivirus? These are special kind of type of malware or virus which can easily disguise itself as one of the antivirus tool. It would easily infect the PC and laptop when one accidentally clicks on the link given in the website. This website would automatically download all the malware into the given PC and then would automatically click the given links in the website.

Now this would scan the infected PC and laptop, thereby producing some kind of fake alert or warning. What happens is that this would ultimately convince you that the PC is somewhat in danger and would then force and urge you to buy the latest and useless copy of the fake antivirus. It is important to remove these fake antiviruses from the system as soon as possible. The biggest advantage of the Remove Fake Antivirus 1.99 is it can easily help in removing the fake antivirus which are really the trojans and viruses.