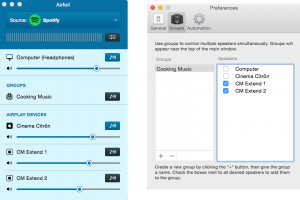 Recently, Rogue Amoeba released the latest version of Airfoil. The AirFoil 5.0 is for Windows OS and even for the Mac 5.0, the same version can be used. This is the new version with regard to the tool that helps in streaming audio from PC to any of the supported network devices like AirPlay hardware such as AirPort Express and Apple TV.

Furthermore the Version 5 has added feature where it can support Bluetooth devices and a new feature has been introduced which is a free tool. That is called Airfoil Satellite. This particular tool can convert other Macs, iOS devices and Mac into the major clients for the main Airfoil tool. Another major advantage is the Bluetooth support and somewhat you can say this is the highlight of this release.

Previously, this so called AirFoil was simply restricted to doing simple things like streaming the various Apple devices. However, the new functionality makes it now possible for various users to stream the audio. It can be a single audio or many audio and provides application output which can be connected to a single or more connected Bluetooth machine.

Now if only a single application is chosen, then the remaining or all audio will remain as the major output for the speaker of the PC. If there is support for the various outputs, it will just give the users the chance to stream all the connected devices in a single click. Furthermore, the version 5 of the AirFoil can give extensive support to Groups. Here it is a means of simply grouping the speakers into a related set, thereby giving users a chance for streaming the output to all the available members of the group in a single click.