A Better EaseUs Version That Supports Windows 8 Has Been Launched 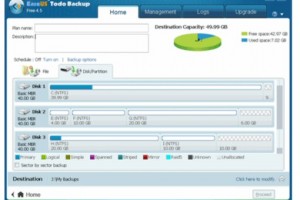 EaseUs has now updated its windows with the aim of making a better back-up tool for the users. The china software developer has announced the release of EaseUs ToDo Backup 4.5 version. Within a single application, it is possible to use it for a combination of data and image backups.

The backup management interface of this version is better and more revamped. Moreover, it has also been proved to be user friendly especially for new users. Editing and deleting back ups has never been this simple. Lest you forget, the EaseUs ToDo Backup 4.5 version is also compatible for windows 8 consumer and also makes it possible to interconnect backup tasks with plans. However, the biggest benefit of the reloaded version is the fact that the back up management section is more quick and easy to use. It makes it possible to edit existing plans in a more flexible manner. If you have plans, you can opt to rename them as quickly as possible with a better option of tweaking scheduling options. In addition to this, it is also possible to view the current status of the backup. Yet at the core of it, users also have the golden chance to opt between full and incremental backups. They can also do away with individual backup images and tweak back up settings.

The other amazingly unique advantage of the new version is the interconnectivity. Backup plans and tasks can be interconnected through tweaking the schedule box. Above all, there is also the ability to restore images to dynamic volumes. For a long time, the problem of exchanging mailboxes has been looming large. This new version comes in handy with an option of backing up and restoring these mailboxes. There is compatibility with Windows 8 but the rest of the improvements in this version are restricted for payment.