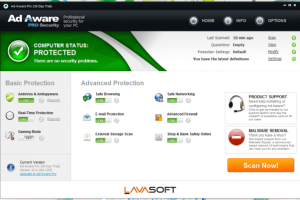 The release of Ad-Aware Free Antivirus has come as a surprise for many users. It has come with more than enough significant changes to the engine and its firewall tools.

Ad-Aware free Antivirus +10.1 is the best security step for a modern computer user. Not only is it user friendly, it also has bigger impact on your system. Moreover, it also consumes less space in the system. This latest release has seen its scanning engine tweaked hence making the scans to be performed in a quick manner. It is obviously a better way of keeping the system safe from viruses and other forms of threats. Apart from the numerous additional improvements, the program has undergone a makeover and significant metamorphosis to be more useful to users. It is snappier and faster in all the scans. Ad-Aware Free Antivirus +10.1 is very sensitive and adds even programs that have been perceived as safe to the white list. Moreover, it also supports the 64 bit versions of windows. It really does not matter if you are using the firewall or the antivirus. However, the changes made to make the system drivers more reliable have also had some negative impact. For example, if you are using windows 2000, there is no support for this operating system.

For multi use systems, there is no problem even when switching between accounts. This is among the problems that have been addressed in this new security software. It makes the security tool to be able to detect a wide range of threats. This is a gigantic leap forward for this security tool especially at this time when the competition is tight. For more information about the program, you simply have to go to the Ad-Aware Free Antivirus +10.1 page and get more reviews. You can also get your free copy here.