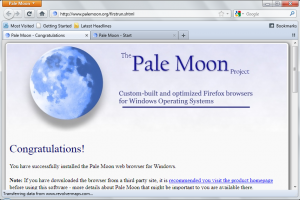 Get the Pale Moon 15.1, recently released, a well known FireFox clan variant that dominated the browsers world for its light base and faster speed. The new version is a sign of continual develop on the issues that got the earlier versions of Pale Moon compromised on its reputation ground.

As a 64 bit dedicated output the new Pale Moon 15.1 combines improvement in memory inflation, better functioning of the private browsing mode and added ease of handling with the mouse scrolling.

The latest version released in the end of last month is free from mouse scrolling glitches. Its default setting became easier to customizable with options dialog box. Websites with tones of graphics can easily laod now. The developers have the graphics chips refined to keep the memory usage level in a scratch.

While the recent released have accommodated all three majors disappointments with the earlier version, more specifically with the Pale Moon 14, it brought out some more sterling features for the users. As added feature the Pale Moon 15.1 now has greater compatibility with XPs with 64 bit program installer. The Jscript stability is also achieved on 32 bit. Inclusion of favicon on address bar, dialog box for Safe Mode, restoration of dialog box, separate dedicated identity panel for domain verified sites, for example, blue panel, autofill default preference for address bar have made Pale Moon 15.1 an worthy choice.

The Pale Moon 15.1 has performance optimized in the recent release that covers Direct2D brush caching. The Direct2D brush caching is a multithread box blurring and float point transcendental method that works with speed. This will help to get better results in shared resources. The profile setting is also worked in the new release to get restored with single click.

Available as freeware to download Pale Moon 15 is developed to be a better browser for Windows platform. The browser is in sync with OS’s having SP3 running for old ones and no hassle for 64 bit OSs.