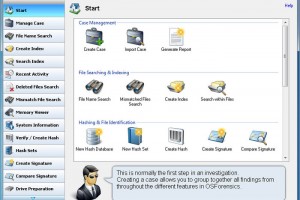 Passmark has released one of the latest computer forensic packages named OSForensics. It is a new entity that comes with new functionalities as well as an improved user interface.  There are also other useful additions included to make it a better tool even for the novice user.

OSForensics 2.0 is better in many ways compared to its predecessors. For instance, the new version now goes beyond indexing documents on a drive. Users will now be able to use the program to specify many drives within a given index or many indexes. The drives can then be searched in a single operation. If you are a keen observer and you have used the previous versions, you will concur that these new features makes it a more convenient tool to use. If you are an enthusiast of the indexing feature, it is now easy to use and more convenient. You do not have to configure the fine details very time you use it. There are major templates included that permit users to define file extensions particularity the ones that you want to check  and how the indexing should happen. It gives as clear details about the file names, content and the title or me data.

With OSForensics 2.0., file search is now faster and more reliable. There are also notable improvements to the raw disk, the internal file viewers as well as the email. The program has been further enhanced and improved so that it can directly open office documents. This is a step in the right direction that will improve its performance significantly. The program also offers file search tools, disk viewers and advanced password recovery option. Without a doubt, this is a useful tool that can do more than computer forensics. It is simply a powerful and versatile tool that can benefit the user in many ways.