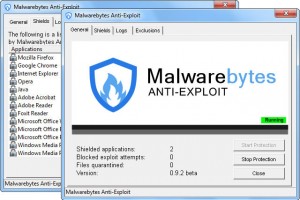 The first public beta version of Malwarebytes Anti-Exploit has been released by Malware bytes. It is an improved and rebranded version of ExploitShield which was owned by Zero VulnerabilityLab. The same way it is previous version did, Anti-Exploit is proving itself a tool that is extremely easy to use. It is able to protect applications from web based vulnerability, zero-day exploits and many more.

Perhaps its simplicity is its most important aspect. There is no setup, no configuration to do, no signature updates to look after or anything more. As you install it and launch Malwarebytes Anti-Exploit will go to work immediately and shield your system against exploits which include undiscovered ones that are probably used by malware for infecting your PC.

In case you need to be more in control, right click the system tray icon of Anti-Exploit and you will get one or two options. For instance, a basic console will tell you the number of exploits that have been blocked and will provide you with simple logs. In case your system works in an odd manner after the installation, you could even turn off protection in order to trouble shoot.

Otherwise, anti-Exploit will work on the background and you will not even notice it.

It is not easy evaluating how reliable the software is but the recent purchase of the company by Malwarebytes was due to its technology which is an evidence of its potential.

However, there are ample reasons for one to like Malwarebytes Anti-Exploit. It is light in weight and compact (Usage of RAM rarely came up to 3MB when tested on our PC), able to protect a long list of programs. Also, it is not likely to conflict with the regular antivirus package of your PC. Have a look.