Use OPSWAT Security Score And Find If Your PC Is Safe 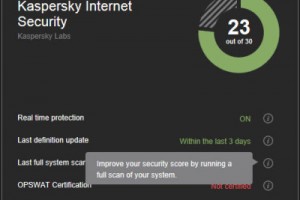 The final version of Security Score has been released by OPSWAT. It is a simple tool that could scan your PC finds any security issues, makes a report and also recommends solutions. This exceptionally easy program to use has no interface to deal with, no settings to make, you have almost nothing to do. Only thing to do is launching Security Score and it will scan your PC and will return the details in a matter of seconds.

The report you get is also a simple one. You will get a score out of 100 overall. Individual scores will be there for five areas. Antivirus, Backup, Antiphishing, Encryption, Patch Management, File Sharing and Firewall. Test PC of ours was able to score 88/100 for instance. It is not a bad score. In case you want to know the ways to improve you have the option to click in areas where your score was poor in order to find reasons for poor scores and for some advice.

We only scored 3/5 for Public File Sharing, for example: why? A click told us that OPSWAT Security Score had detected a uTorrent installation, file sharing increased the risk of malware infections, and so the program was recommending we remove this. (Although whether you do so is your call, of course.) On hard disk Encryption our score was a miserable 1/10. The reason was we have never used BitLocker or a similar program.

OPSWAT Security Score is not such a smart program. As such, experienced computer users will find that it is a program that is able to tell anything they already don’t know. Novices will want to know more from the program. (Though BitLocker is not the only encryption tool to be used on hard disks the software won’t give you an alternative.)

Still this program provides a simple way for checking systems of others. For instance, if you want to check if your children’s laptops are configured the right way you could use this program justifying its download.