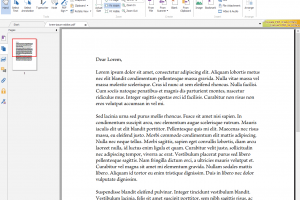 The new version of Foxit Reader 6.0.2 has been unveiled by Foxit Corporation that adds tools for PDF creation to the roster of this freeware for the first time. It also unveils the revised ribbon-based tool bar that follows MS Office 2013 model.

Version 6.0 is also added with hand written signature support, possibility of creation and insertion of stamps, search and read PDF portfolios as well as integration to Evernote. These features bring Foxit Reader 6.0 to the level of Nitro Reader 3.5 that pioneered freeware.

The biggest improvement Foxit Reader 6.0 carries is its tools for PDF creation. It also could scan documents into editable PDFs.

The new version also follows the appearance of MS Office 2013. The ribbon tabs have been replaced with a new Share tab.

There is also a way to sign documents with version 6.0. Users could bypass the present feature of DocuSign. They could create handwritten signatures from existing image files or from the clipboard. Also, they could scribble it on-screen. Using multiple signatures also is possible.

“Stamping” documents is also possible with pre-defined designs of three categories. “Sign here”, standard and dynamic are the three. These could be viewed through comment tab or a dedicated window for stamps pallet could be opened.

Foxit PhantomPDF Standard 6.0.2 also joins the new version. It does introduce creation of PDF forms, paragraph editing, editing scanned documents, dragging and dropping pages in between documents, bundled desktop index for PDF, better file compression and creation as well as validation of PDFA, E and X. PhantomPDF also offers some of the features you get with Foxit Reader 6.0.

Foxit Reader 6.0.2 could be downloaded free for PCs that run Windows XP SP3 and later editions. Foxit PhantomPDF Standard 6.0.2 could be got as a free trial too. There is the standard edition of PhantomPDF for $89 and its business edition is sold at $129 retail.