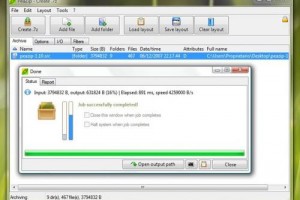 It has been revealed by Giorgio Tani that PeaZip 5.0 which is the most recent version of his powerful and popular tool for file archiving which according to him offers a major design and code clean up.

Practically this means lots of enhancements on interface making it still easier to use the program. A new menu on History, lists the archives and paths that have been used recently, for instance; now Bookmarks section is maximized by default as you open it. It has system locations which are useful that help you to start right away. In addition to that the dialog for settings has been totally reorganized and also it is simplified.

Support is now extended to .crx (extension for Google Chrome), .maff (archive format for Mozilla), .mdf (files for Alcohol 120 images), .cddx (conventions for Open Packaging) and .appv (Application Virtualization for Microsoft) files. This means the number of file extensions PeaZip is now able to handle is 174.

A performance tweak that comes in handy makes it no longer provide the list of content of folders by default in the layout of an archive. However, this could be done on demand (by right clicking in layout and selecting “Enumerate directories’ content”). You also could restore the behavior that was there previously. (Options>Settings>clear “Skip enumerating directories’content in layout”)

Improvements made on windows include rapid links to Music of yours, Video and picture folders. Adding multiple items through context menu is also easier now.

If by chance you happen to use pgm or xpm images you will be happy to find that the program is now able to display their thumbnails.

Several more additions, improvements and fixes are also there with PeaZip 5.0. For full details you need to point your browser at official change log. Also, you could obtain a copy and check it on your own.