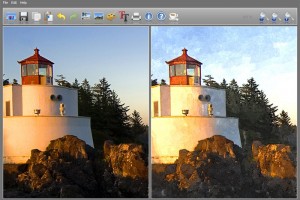 Digital art creation freeware tool of FotoSketcher 2.45 was released by David Thoiron, its French Author. You can get it also in portable form. Windows users who wish to transform their digital photos get virtual works of art could use this tool effectively.

A new Stylized effect called Emergence 2 is introduced by version 2.45 which improves on the presently available brushstrokes-based effect. A number of minor bug fixes also are included in it while a series of scripts are also made available by the author for you to download.

The Emergence 2 effect which is the new one brings in a promise of different results that are offered with the present Emergence effect. Its results appear similar to knife painting. It calculates the source image with the used of shaded triangles. The users are able to get the best version by making a double click on the number on the right of “number of iterations” slider in order to set it to its maximum.

Also, FotoSketcher 2.45 refines the existing paint effect of Painting 7 (brushstrokes). It is also able to improve the placement of brushstroke which Thoiron describes “a more painterly effect”. Two bugs that includes one in the custom brush codes of painting 7 and 8 effects also have been squashed. Also a few bugs in the script code also have been looked after.

A number of scripts are also offered by the author for you to download to show the power of the new scripting engine of FotoSketch that was offered first with version 2.40. In order to access it users need to save the zip file in their hard drives and unzip the contents prior to opening them with FotoSketcher’s window for scripts by pressing [5] in order to access it. Scripts offer a lot of actions that are customizable. Also, it provides some additional effects through the combination of multiple effects.