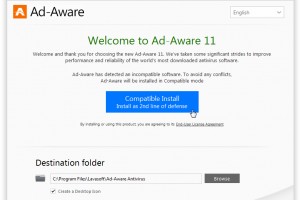 The reputed Swedish security solution developer LavaSoft has recently released the updated version of its free and paid version of adware the Ad-Aware Free Antivirus 11.2. The PC security program has received tweaks in its performance engine with boosted capability of scanning adaware and malware, synchronized its disinfection process in the update. As an additional change, capability to run and operate along with other security software the program received new codes. This will surely help the users of Ad-Aware Free Antivirus 11.2.

According to the published LavaSoft, the recent release is the cautionary response to the growing trends in PC security solutions industry and as a publisher they understand user’s orientation towards running multiple security programs to their computer”. With this statement the Ad-Aware Free Antivirus 11.2 released with simpler installation process than its earlier versions. During the installation process it checks for other security software installed in the PC but does not disable them. However in some cases, the program is capable of correcting its own installation where files and codes from other security programs refrain installation of newer security software in the PC. To explain it further, if during the installation the tool detects the operating system as incompatible by other programs users have the option to run its compatible installation as well.

The Ad-Aware Free Antivirus 11.2 will work as a real time protection to your PC. You need to regularly scan the PC using the software or turn in on in the background while working with another program. In the new program the virus definitions are updated and the scanning engine is powered with more strength. The user interface is changed a bit in the new release but it still remains flexible and easy to operate. While the free version have new features upto this, the Ad-Aware Free Antivirus 11.2’s Pro and Total version, that are the paid ones, come with some more benefits like email guard, spam controller, parental control etc.

The update in Ad-Aware Free Antivirus 11.2 is more towards completeness and professional performance than the earlier versions. It is easier to conclude that the program will make you happier than any of its previous versions. So, try now.