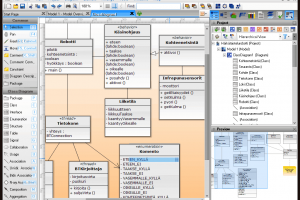 Software Ideas Modeler 8.3 is basically an UML tool. It supports various types of diagram as specified in UML 2.4. It supports various diagrams and standards such as JSD, SysML, CRC, ERD diagrams, Mind Maps, data flow diagram, flowcharts, ArchiMate. The software is written in the programming language C#. You could convert to various formats such as jpg, png, tiff, bmp, gif and vector format images such as SVG, Windows Metafile and even formats like PDF. There is also provision to export to XML.

Software Ideas Modeler 8.3 is a tool that is considered to be powerful and light in weight to create diagrams in UML and other forms of diagrams. The latest version does come with around 50 improvements which include bug fixing. There has been a lot of improvements in comparison with the features of the project. It is also to be noted that databases in MS SQL was improved through reverse engineering with the generation of the code.

The new version does provide additional support of programming languages such as Ruby, C++ and fixing of bugs that arises. There are additions of autoscroll to the project, addition of panel to the board with diagrams association, additional support to rectangular relationships for creation of automatic points. It also provides improved form of naming foreign keys in the SQL scripts that are generated and in connecting required and interfaces that are provided. You could even get extra details to message boxes that are exception.

As a part of fixing, it does fix auto size columns that are in grid format, updating title of the windows once the file is saved, fix the line for editing, saves the element of vision, fixes the application crash once the fields are removed from SysML Block, removing the relationship point once the diagram is Purchasing of Sofware Ideas Modeler is possible if you go for non pirated version. Advanced features are available only once you buy license only. Definitely it is recommended to try free version before you can decide to buy the original one.