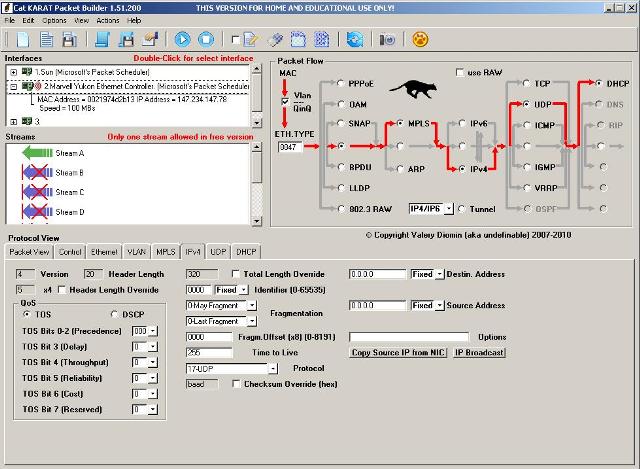 The Cat Karat Packet Builder 1.51 is a simple, lightweight and intuitive type of software. This is aimed at offering the network administrators and other IT professionals in various fields the basic means of effectively testing and troubleshooting the various kinds of problems related to firewall configuration. The main window feature of the tool consist of various distinct and active panels. These can be used by users for listing the current and available streams, interfaces, packet flows, etc. and even help in browsing through the given Protocol View.

This tool has got a practical and clean appearance when compared to other tools available in the market. In addition to the fairly and brief uneventful installation, here the user can easily start with the given program at the first instance. Also it features an approachable and simple graphical user-interface. This helps in preventing to resort to some kind of command line arguments which can help in getting the job done.

The main window of the Cat Karat Packet Builder 1.51 features various distinct panels. In such panels, the user can easily get the view of the available interfaces, packet flows, streams, and even browse through the ‘Protocol View’. Not only that, it can be easily create data packets which can easily be used for testing the firewall or network configuration.

Also, the users do have the option of simply opening or creating the PCAP data packets by using a less clicks. In addition, one can easily made modifications or edit the given packets. Even the bytes can be added and lines can be created to it. This Cat Karat Packet Builder 1.51 is quite handy and it can help in sending the targets to the concerned target networks and even help in analyzing them without doing any exit.

Most of the time, users can easily load and run custom protocols and automatic scripts. Also in the Packet Flow section of the Cat Karat Packet Builder 1.51, it is easy for the users to click the various components and elements. This means that it can change the path which is taken by the given packets and even supporting both the ‘IP6/IP4’ and ‘IP4/IP6’.

In addition, the users can easily work with the VLAN increment and Fast MAC, Allow Jumbo Frames, Allow Truncated Packets, etc. So, what happens is that once the configuration is completed, the user can easily start the given transmit and even analyze the transfers.